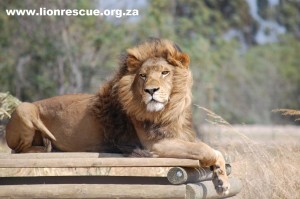 SkyTEM Africa has adopted the male lion “Gaucho” who lives in the Drakenstein Lion Park in South Africa. Gaucho was rescued from a Chilean Circus.

SkyTEM’s regional sales manager for Africa, Vasco Nunes, just had to do it when he learned about the heart-rending stories of the lions, and he also adopted four other lions personally.

The adoption fee paid by SkyTEM contributes to the care costs of the lion, including food, veterinary and housing costs.