Why does calibrated data matter to you?  SkyTEM is a one-time calibrated system, allowing for direct comparison with previous SkyTEM and ground based or borehole EM data sets together.

A paper by James Reid (Geoforce Pty Ltd), describing SkyTEM results from a uranium mapping program said SkyTEM “has a self-response below the natural noise level, and there is therefore no requirement for drift correction or levelling of the data. A recent SkyTEM survey at Pells Range has yielded results consistent with mapped geology and extensive regional drilling. The survey clearly identified a palaeochannel system within the Moogooloo Sandstone which is associated with known uranium mineralisation, and has provided clear targets for follow-up drilling.” From the abstract found here.

These conclusions are based on two very unique and very crucial characteristics engineered into all SkyTEM systems. (1) the two receiver coils are null-coupled to the primary transmitter resulting in a very high signal to noise ratio (SNR) and little to no bias in the received data and, (2), SkyTEM is a calibrated system. These qualities contribute significantly to data accuracy.

The nature of both SkyTEM’s frame and the hardware means that the raw data is well-calibrated (i.e. system bias is below background noise level and there is negligible drift). The receiver coils are placed so as to be null-coupled to the primary field of the transmitter, in order to minimise the self-response of the system. The bias signal from the transmitter is very low, meaning that regular excursions to high altitude to monitor the bias response are not necessary during each flight. In terms of applications and benefits to customers, this means that: 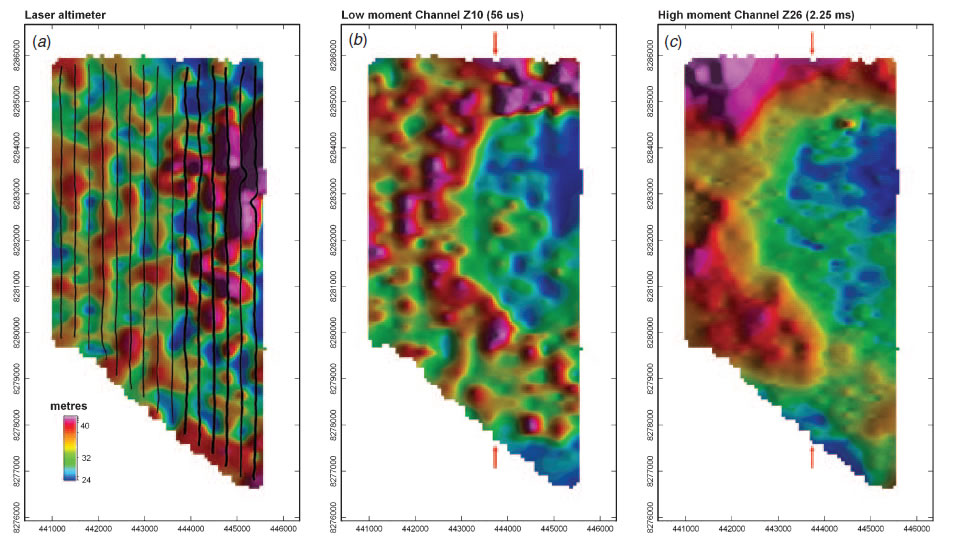 The boundary between the two survey blocks is indicated by the red arrows on the centre and right-hand panels.

In-loop geometry means fewer corrections need to be applied to correct for lag offsets, thus preserving the integrity of the originally measured data, together with higher accuracy as to where the anomaly originated.  Additionally, the rigid slung load platform’s position and orientation is continuously monitored and together with its separation from the aircraft means that Caesium-vapour magnetic data is not being corrected with lower frequency response fluxgate data in the compensation calculations.  Corrections regarding frame geometry are actual and not approximated.

SkyTEM, architects of the only DualMoment TEM technology, once again take airborne geophysics to the next level with the fastest helicopter TEM data acquisition available. Engineered with a rigid aerodynamic carrier frame SkyTEMFAST remains straight and level during high-speed flight benefiting data quality as well as survey efficiency and economy. Data is able to be collected at speeds of up to 150kph with a late time gate of 15ms and 500,000 NIA to maximize depth of penetration. This system is ideal for large regional surveys and data collection over level terrain, with low terrain clearances , combined with the ability to drape fly. The helicopter platform also offers logistics flexibility, potentially lessening the need for long refuel ferries.

For budgetary reasons alone, large-scale airborne surveys have traditionally employed fixed-wing aircraft (FWTEM) platforms. This, however, has often been at the expense of near-surface resolution due to the separation between the transmitter and receiver of fixed wing systems and the requirement to fly at higher altitudes and faster speeds than helicopter-borne electromagnetic (HTEM) systems. As a result ground geophysical surveys are often required to followup the targets detected by fixed wing systems. With SkyTEMFAST as a helicopter platform the geophysical surveys benefit from the ability to operate from remote locations and there is no requirement for a landing strip or airport as there is for FWTEM.

Geoscience Australia conducted field tests to compare results of three helicopter-borne systems, the SkyTEM312, SkyTEM312FAST and a well known competitors non dual moment system.  The published conclusions can be found athttp://www.publish.csiro.au/ex/pdf/ASEG2016ab302.  They include “At depth there is very good agreement between the three systems” but “SkyTEM systems have a better resolution in the top 30m.”  The paper states that this near surface resolution is not seen in the other system.  The ability of SkyTEM to detect the more subtle resistivity contrast due to the geological structure above a deposit is significant in that it may represent an exploration indicator for the location of large deposits at depth.  It also provides shallow information that can improve the accuracy of inversion or discrete target modelling results.

Geoscience BC selected the SkyTEM312FAST system for their Peace Project – a subsurface mapping project designed to collect new information about geology and lithology within an 8,300 square kilometre area in northeast British Columbia.  The Peace region of the province has been a focus of petroleum exploration and development since 1952 and participating partner companies included the BC Oil and Gas Commission, Conoco Phillips and Progress Energy as well as several Treaty 8 First Nations.

The main priority of the project was to map the area, comprising some 21,000 line kilomtres, in fine detail to a depth of at least 300metres.  In addition, a major project planning constraint was that the airborne data acquisition had to be completed before the hunting and trapping season began.  This required the project to be complted within seven (7) weeks from start up.  In order to meet this tight deadline, SkyTEM312FAST was selected for data acquisition.  Over 1,000 line kilometres of data were often collected during a single day, unprecedented in HTEM surveys, with total coverage completed in only forty-three (43) days, well within the timeframe required.

While the initial objective was to map to at least 300m, SkyTEM312FAST resolved geology in some areas to depths approaching 500m.

For more information on the Geoscience BC Peace Project, please visit their website.

“I had the opportunity to perform QA/QC checks on SkyTEM’s preliminary data and found it to be consistent and of high quality. SkyTEM maintained excellent communication with me throughout data acquisition and delivered the data electronically in a time fashion required in the contract”
~Dr. Mel Best, President
Bemex Consulting International

“SkyTEM312FAST is an incredibly efficient system, and we are impressed by the great results we have achieved so far.  Not only does the SkyTEM system map the near surface we were looking for, it now seems the system has a much greater depth of penetration than we expected for resolving much deeper geology.   The ability to review high quality data several times a week was also a benefit to our program”
~Carlos Salas, Vice-President
Geoscience BC

TMAC Resources conducted a SkyTEM survey in the summer of 2015 over their Hope Bay and Elu gold mining project areas in Nunavut.  The survey required the acquisition of 15,000 line kilomtres of data to supplement previous exploration carried out on the Greenstone belt.  The depth to known mineralization was in the order of 500m or more so a high powered SkyTEM system was configured to operate with an NIA of 1,000,000.  In the figure below the SkyTEM resisitivity data (blue) is in good agreement with an area of known mineralization at a depth of approximately 500m.

Resistivity data for TMAC Resources
The near sufrace was also well resolved and the shallow conductive feature (red) is interpreted to be an aquifer.  The presence of readily available water in the area can be of benefit to future mine operations, or an environmental concern.

Mapping a wide range of resistivities

Not just a “bump-finder” SkyTEM is able to leverage recent innovations and delivers image of subtle changes in lithology from the very near surface to depth.

SkyTEM introduced the first system capable of operating in Dual-Moment mode that combines high resolution near surface data (previously only available with helicopter frequency domain systems) with the ability to map at depths of 500m or more.  This patented innovation allows for discrimination between weak geological contrasts giving a more complete and accurate interpretation of geology while increasing confidence in modelling deeper geological structure by illuminating any links between surface and depth.

Advantages in the Near-Surface over Frequency EM (FEM)

Looking to depths greater than 500 metres

The patented Dual-Moment nature of SkyTEM means that it is the only system in the world capable of resolving both shallow (<50m) and deeper (>500m) information in a single survey. This provides customers with a multiple-use dataset, with single-pass surveys providing:

As conventional HTEM system focus on increasing the depth of investigation, an easy way to increase dipole moment (NIA) is to increase the transmitter loop area or number of turns of the loop.  This has led to increasingly heavier arrays with additional weight leading to larger, more powerful helicopters being required to maintain flight performance characteristics and safety margins.   They also typically decrease near surface resolution and production rates.

Recent SkyTEM R&D has reduced the size and weight of systems while at the same time increasing the dipole moment (NIA), decreasing noise resulting in increased depth of investigation (DOI).  All SkyTEM are now available on a 341m2  rigid and light weight platform.  The basic building block is then fully customizable for dipole moment and survey speed to suit specific exploration targets or manage safety risks such as hot climates or steep terrain. 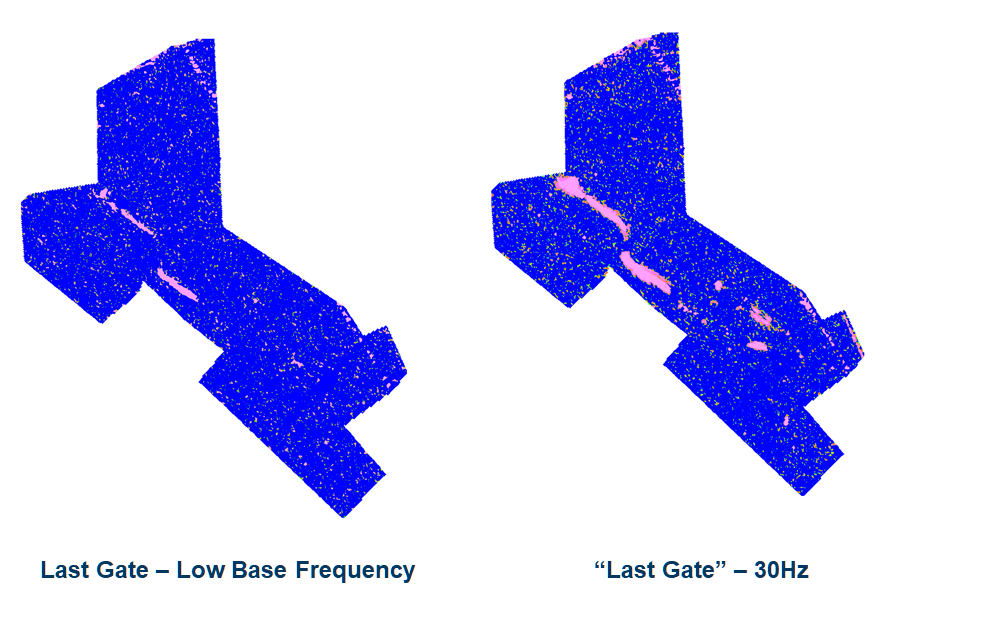 Figure – Joint inversion of both moments 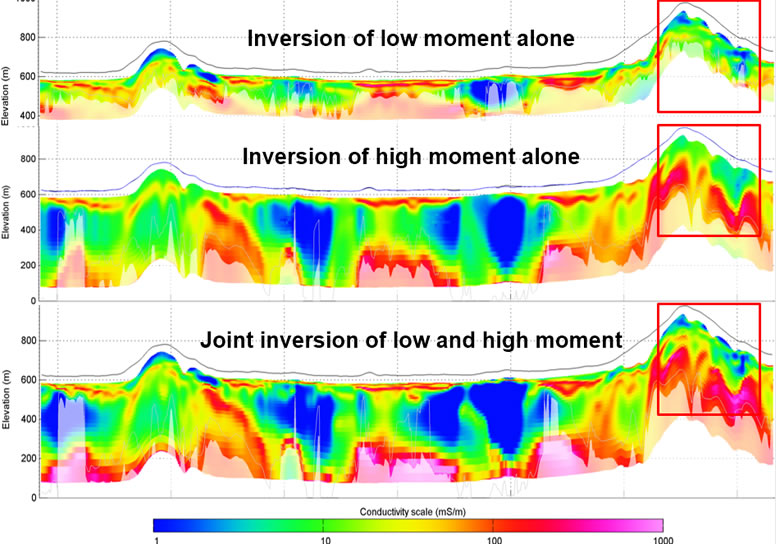