Information presented in the report is the result of the Peace Project, a Geoscience BC-funded project focused on mapping and assessing groundwater in the Peace Region of British Columbia. The report presents data from a SkyTEM airborne electromagnetic (AEM) geophysical survey that was employed to map the hydrogeology in the Peace Project area.

The Peace Project was planned to deliver regional hydrogeological data through an integration of pre-existing data from shallow wells and 3-D seismic surveys with the results of an airborne geophysical survey. Airborne geophysics was considered an essential tool to provide more cost-effective and time-efficient coverage of a large area, than ground-based geophysical methods. The AEM system employed for the project was SkyTEM312FAST, a helicopter-borne TDEM system. The 8000 km2 area was covered in 43 days.

The objective of the AEM survey was to collect resistivity data from near surface to depths up to 300 m and combine this new information with prior data to 1) interpret potential Quaternary and bedrock aquifers within the area; 2) provide a map of the Quaternary–bedrock interface and thus Quaternary sediment thickness; and 3) generate a magnetic structure map of the basement. In general, it is expected that a joint interpretation of all geophysical data will help to determine optimal places for accessing and/or protecting the groundwater and finding non potable sources of water for energy sector use.

The AEM survey involved collecting over 21,000 line-km of data, covering an area of about 8000 km2.The airborne system used, SkyTEM312FAST, collected TDEM and magnetic data with an average speed of 118.8 km/h over the entire survey area. Preliminary data was delivered for quality assurance-quality control purposes every 48 to 72 hours to a third-party consulting firm. At the time of writing this paper, the final data and inversion results were still in the processing stage.

An important component of the airborne survey was communication and outreach with Treaty 8 First Nations and
communities within the survey area. Flights were planned and co-ordinated daily to avoid disturbance of First Nation cultural events, farmers and ranchers in the area. Through discussions with the Blueberry River, Doig River and Halfway River First Nations, the original survey area was expanded to include areas of interest over sections of their traditional lands. Additionally, an area around Fort St. John was flown in response to a request from the Peace River Regional District

Based on the raw data presented above, data-inversion was carried out using the laterally constrained inversion (LCI) method developed at Aarhus University, Denmark. The LCI technique is a relatively new inversion methodology whereby field data are filtered then modelled against a subsurface layer structure that is constrained laterally on a number of chosen model parameters (including layer conductivity and layer thickness).

The report including data and results can be downloaded from Geoscience BC’s website here: http://www.geosciencebc.com/i/pdf/SummaryofActivities2015/SoA2015_Brown.pdf 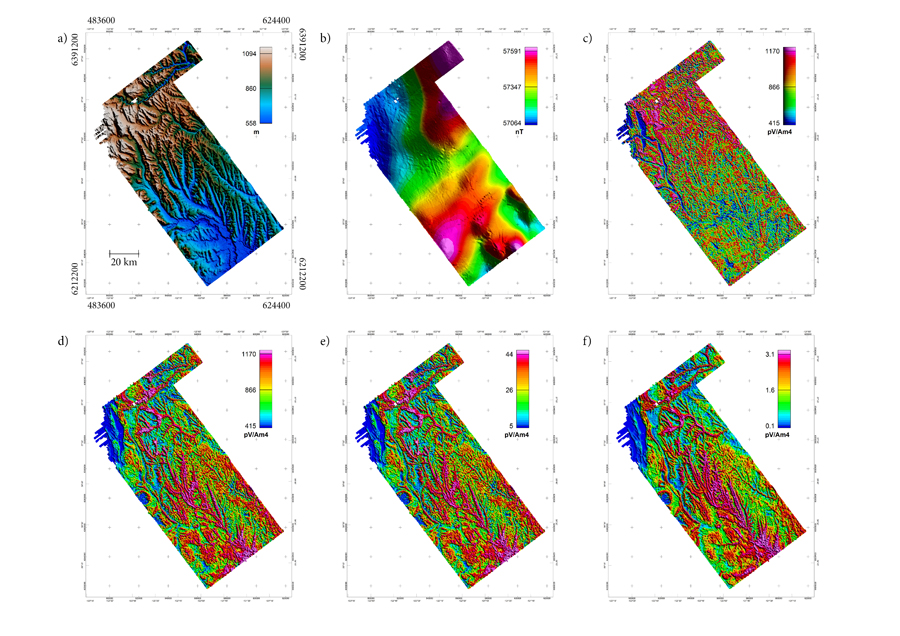