Juggernaut Exploration has released preliminary results of a 759 line-kilometre high-resolution SkyTEM survey on their Empire property, 40 kilometres northeast of Terrace British Columbia. The survey has resulted in the discovery of a geophysically indicated, large buried highly conductive body known as the Big One Anomaly. 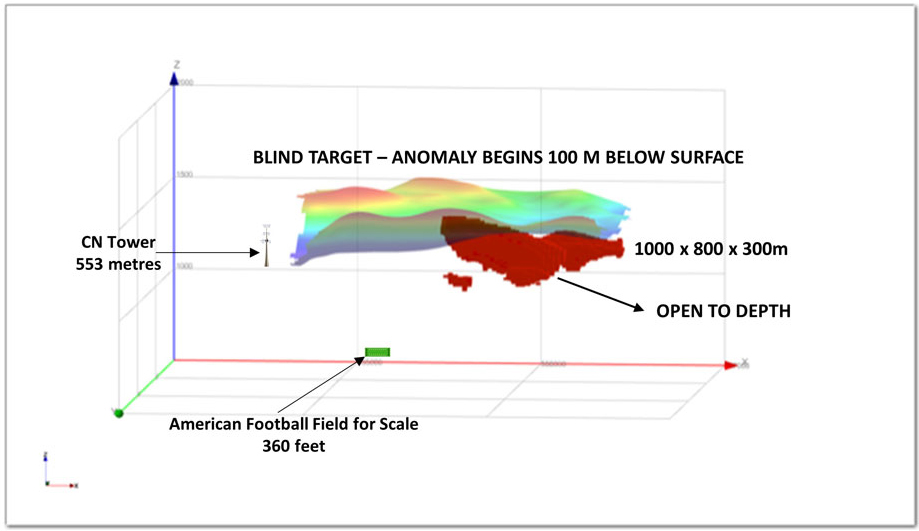 Mr. Dan Stuart, Director, President and CEO of Juggernaut states:
“The company and entire geologic team are very excited to have so many untested new mineralized bedrock discoveries that are drill ready on Empire. These discoveries are located in geologic elephant country and have excellent potential of being one drill hole away from a world class discovery. The Empire property is located in a key geologic terrane that certainly will tick the boxes of the Miners, has road access and is in close proximity to excellent infrastructure in Terrace British Columbia. We look forward to the 2018 drilling season with great anticipation.”

Dr. Stefan Kruse. P.Geo, Chief Consulting Geologist stated:
“Results of the geophysical surveys are extremely encouraging. We look forward to unlocking the full potential of the Empire property in 2018 with an inaugural drill program”

Read the entire press release with links to maps and images here. 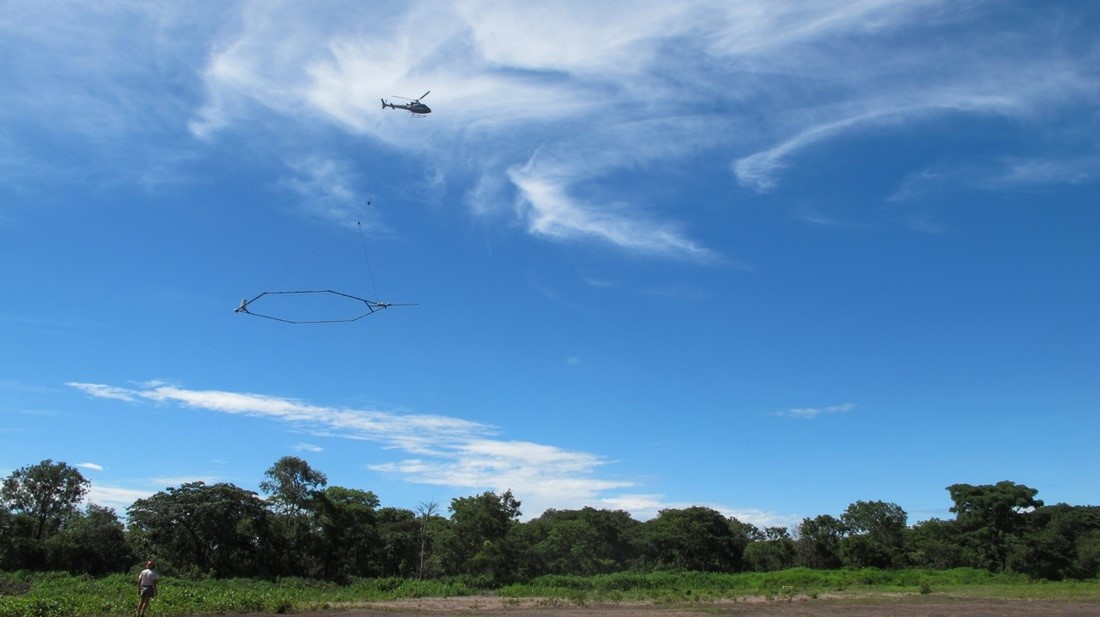 SkyTEM has completed an airborne geophysical EM survey for Orion Minerals in South Africa. Preliminary results for magnetic and SkyTEM data have been received and reviewed. The survey succeeded in acquiring high quality data and initial indications are positive for the identification of priority follow-up targets. Once targets have been ranked, Orion intends to test for Zn-Cu rich volcanogenic massive sulfide (VMS) and Ni-Cu magmatic deposits.

The survey demonstrates the value of applying modern airborne EM methods in the highly prospective Areachap Belt. Numerous AEM anomalies were identified during a preliminary review of the data by Orion’s Perth based geophysical consultants, Southern Geoscience Consultants. In addition to the AEM data, the accompanying magnetic data will significantly improve our understanding of the geology and structure in this area of poor outcrop.

“The results from our advanced airborne survey are extremely gratifying and are providing encouragement for continued exploration using modern techniques in the highly prospective Areachap Belt. We look forward to drill testing the highest priority targets in 2018.” 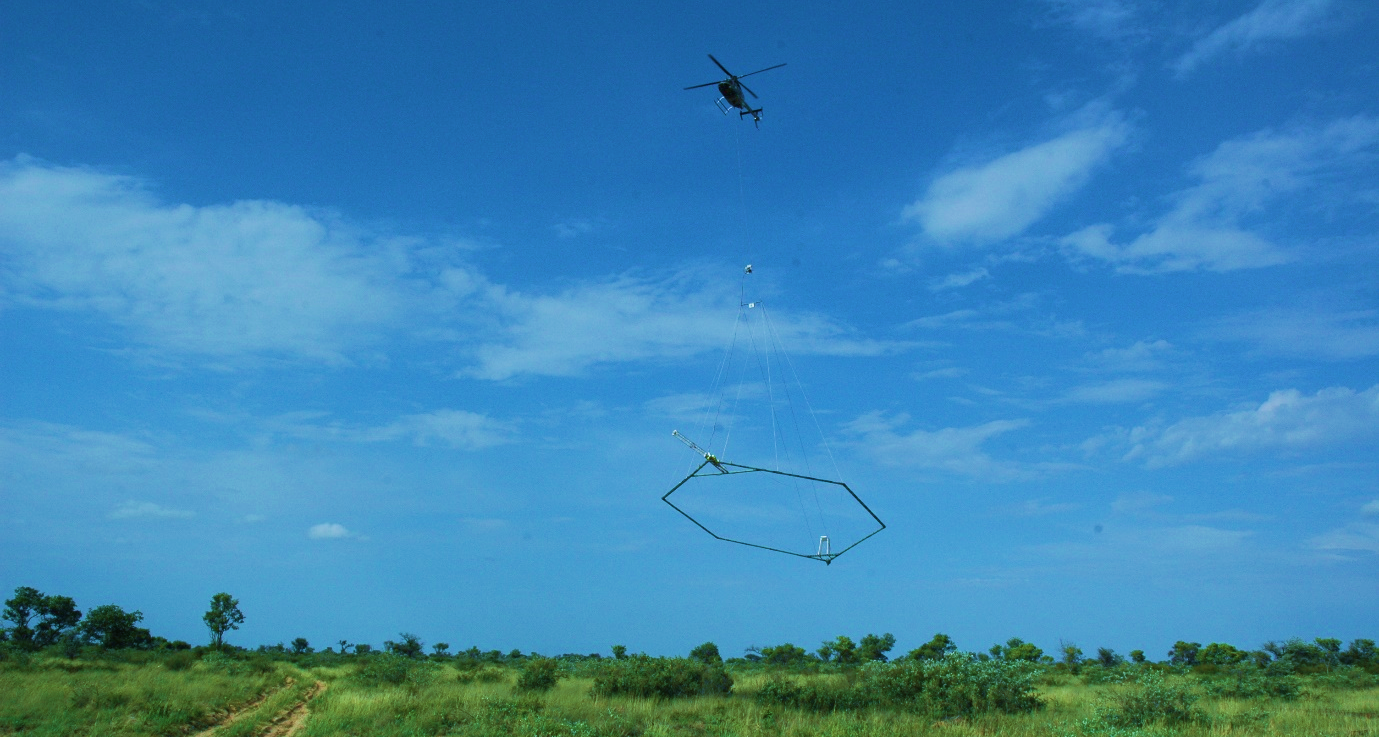 The SkyTEM technology during survey operation (not on Orion projects)

The helicopter TEM survey will be flown with the highly innovative – SkyTEM312 high power technology for deep target imaging. This high power system, with a peak moment up to 1,000,000 NIA, is optimised to provide an exceptional depth of investigation due to the high moment mode with high current and low base frequency of 12.5 Hz. This breakthrough technology is aerodynamically superior to any TEM system on the market and as such, the data collected from the survey will contribute to the Company’s exploration success. The survey is scheduled to commence on 26 November 2017.

X-Terra Resources has published a news release about the upcoming SkyTEM survey on its Veronneau Property in Quebec. SkyTEM Canada has been engaged to conduct a 1,225 line kilometre airborne survey utilizing the SkyTEM312 TDEM system.

The objective of the airborne survey is to provide a modern geophysical database from which X-Terra Resources will generate numerous exploration targets to be tested by a regional mapping and prospectin program planned for the summer of 2017, followed by diamond drilling in the latter half of 2017, if deemed necessary.

We are very exicted to have SkyTEM complete this high resolution airborne geophysical survey. It will serve as an invaluable tool for X-Terra moving forward, especially where surface exposure is poor. Further it wil provide an excellent database from which to design an effective exploration programe […]

X-Terra Resources also wishes to report that preliminary data from its recently completed airborne geophysical survey has been received. Michel Chapdelaine, a director and member of the technical committee of the Board of Directors of X-Terra Resources commented, “The quality of the survey is impeccable and the first interpretations completed by MB Geosolutions are as well. The precision of the data will enable X-Terra Ressources to precisely target their exploration. In addition, the Veronneau showing is located on a ½ kilometre per 2 kilometres area where the MagEM signature is unique as it is very different compared with the rest of the property. We can see certain electromagnetic conductors seem to recut the principal structural grain”.

Alba Mineral Resources has published an RNS on the results of the SkyTEM electromagnetic-magnetic (EM-MAG) geophysical survey conducted in September 2016 on the Amitsoq graphite project in Greenland. The initial interpreted results are highly encouraging and provide numerous target areas for follow-up ground work, geophysics and drilling. These targets include graphite zones and extensions of the former graphite minat Amitsoq, nickel and platinum group metals (PGM) to the north of the former mine, as well as potential gold targets on the mainland to the south of Amitsoq island.

The highlights include the identification of several new faults and numerous anomalies, some associated with potential graphite horizons, as well as two shallow, moderate intensity EM anomalies associated with large ultramafic dyke known to contain magmatic sulphides of nickel, PGMs, gold and silver.

The SkyTEM304 system was selected as it affords greater depth penetration (up to 400 m) when compared to rival systems.

The next phase of exploration will involve further processing of the geophysical data followed by ground verification of targets and the planning of a drilling programme for later this year.

The initial results from the airborne geophysical survey are very promising. We expected to find anomalies in the vicinity of the historic Amitsoq graphite mine, and this has been confirmed by the survey. What is most exciting is the discovery of numerous linear anomalies running in a general north-easterly direction away from the mine area. These are suggestive of the presence of a highly conductive unit that cancontinue laterally for up to 1300 metres at a time. The identification in particular of 11 conductor axes amounting in aggregate to 5.5 kilometres of strike provides us with significant priority targets for follow up on work.

Read the entire RNS here and the article in Directors Talk Interviews.

SkyTEM has completed two surveys in Pribalkhash, Kazakhstan in search of minerals. The survey was conducted for our partner in Kazakhstan, Aurora Minerals Group, a company specializing in the transfer of new technologies and attraction of investments in the mining and oil and gas industry.

Besides mapping the subsurface in search of gold, the purpose of the survey was to mobilize SkyTEM equipment to the country and to train domestic specialists who are young graduates from Aurora Minerals Group as well as to train local helicopter pilots in the difficult task of sling load. Training was performed by Walter Koopmann who has many years of experience in flying SkyTEM systems.

Journalist Gregory Bedenko watched the surveying and took a large number of gorgeous photos that are posted on Aurora Mineral Group’s website here.

SkyTEM was present at the Astana Mining & Metallurgy in Kazakhstan on 15-16 June 2016. Dr. Flemming Effersø, CEO of SkyTEM, gave a speech on how to employ airborne EM geophysics for environmental studies and mine operation. Special focus was put on how to protect groundwater resources when planning mine operations. Dr. Effersø gave examples of  how a SkyTEM survey allows concurrent mineral exploration and delineation of groundwater resources. 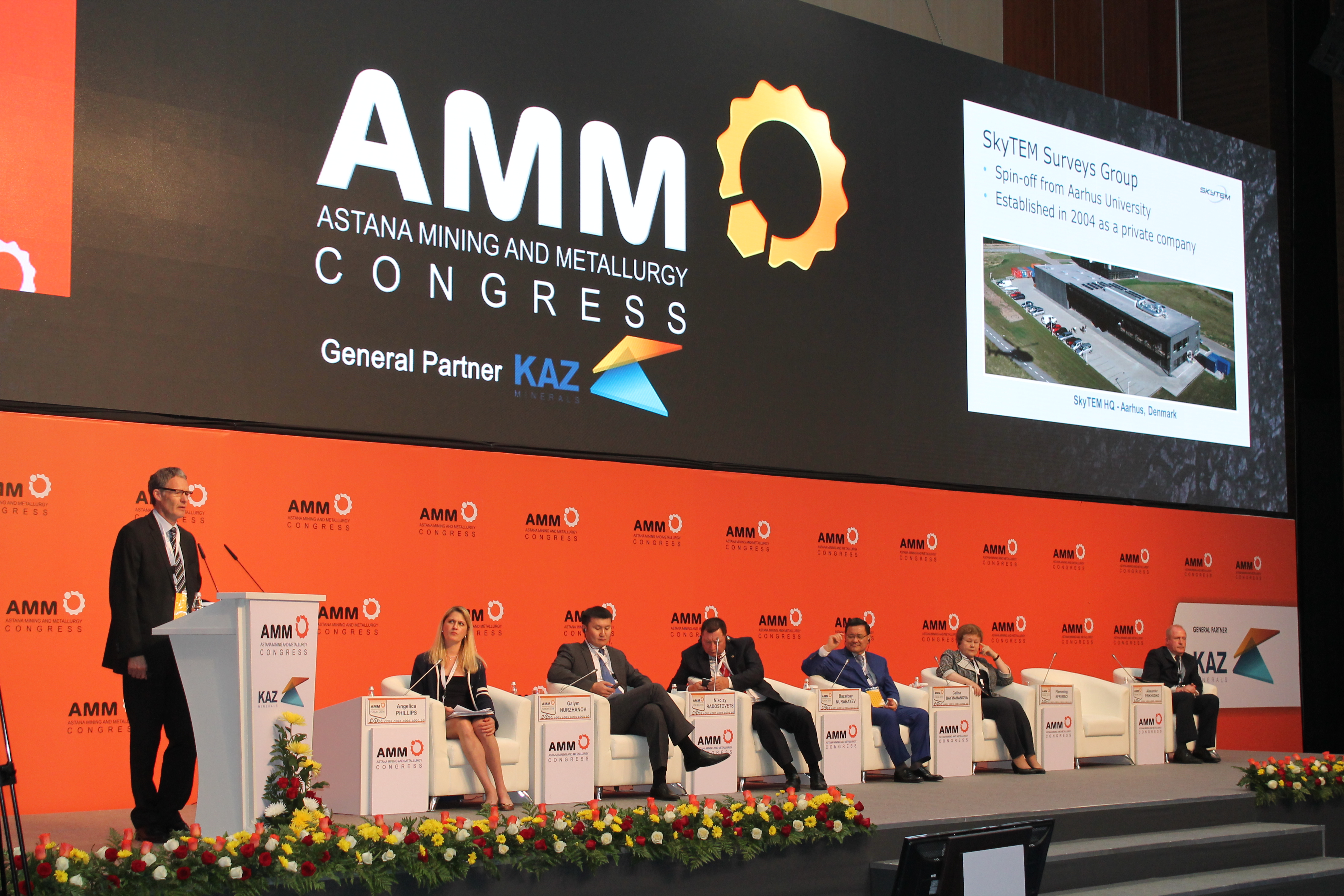 During the conference SkyTEM shared booth with our parttner, Aurora Minerals Group. The booth was well attended by delegates who wanted further information about SkyTEM for mineral exploration. 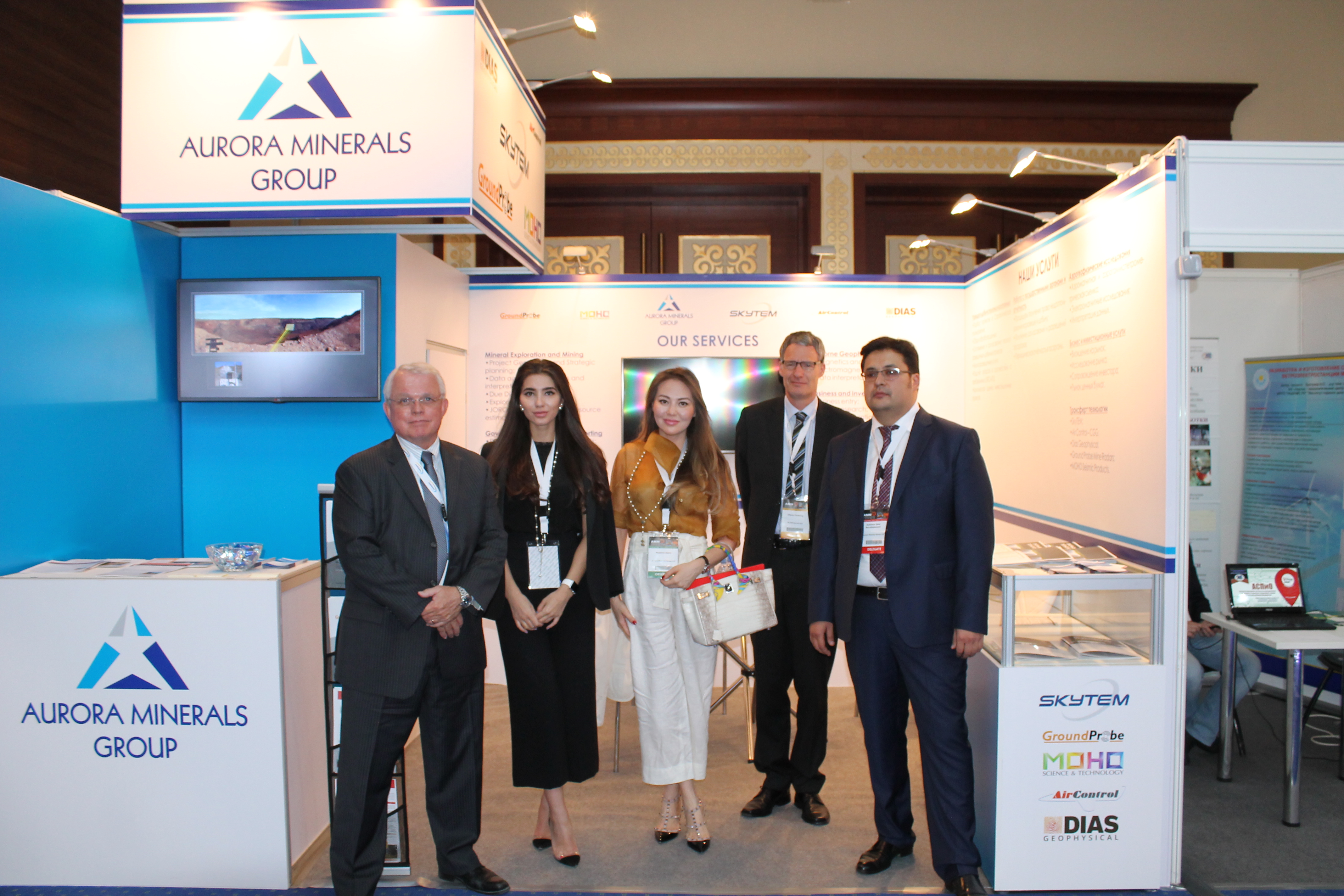 Noram Ventures, a Canadian based junior exploration company, has published a press release on their new discovery of a highest grades of graphitic carbon found at the Company’s Jumbo flake-graphite property, located in the Kootenay region of southeastern British Columbia. The discovery was made on the basis of a SkyTEM survey conducted in 2012.

“These latest results from Jumbo are very encouraging as we expect the project to play an integral role in realizing our plan of becoming a force in the Green Energy Revolution through the development of lithium and graphite deposits, as part of our near term strategy to build a multi-national lithium-graphite dominant industrial minerals company to produce and sell lithium and graphite into the markets of Europe, North America and Asia,” said Mark Ireton, CEO & President of Noram.

The conductive features were delineated in an airborne SkyTEM (Time Domain Electromagnetic) survey consistently associated with a graphitic horizon throughout the Property. The new discovery area includes the highest grades found to date that are coincident with the strongest and most discrete SkyTEM conductive zones. It appears that all the SkyTEM-indicated conductors, with a cumulative length of roughly 50 kilometers of conductive horizon, that has the potential to host significant concentrations of graphite.

To read the entire press release from Noram click here.

SkyTEM Canada Inc is pleased to report that data acquisition on TMAC Resources’ Hope Bay and Elu gold mining projects in Nunavut has begun. SkyTEM and Sander Geophysics have teamed to acquire over 15,000 line kilometres of combined electromagnetic, magnetic and gravity data over TMAC’s properties. The airborne data will be used to supplement previous exploration carried out on the Greenstone belt, helping TMAC create Canada’s next major gold mining camp.

Along with Gravity/Mag/EM data, post processing of Airborne IP signatures will also be completed. If unique geophysical indicators can be defined for the various styles of mineralization at Hope Bay it will significantly improve future exploration targeting and reduce future exploration expenditures and timelines to success. SkyTEM and Sander are both proud to play a part in this important Canadian gold mining project.