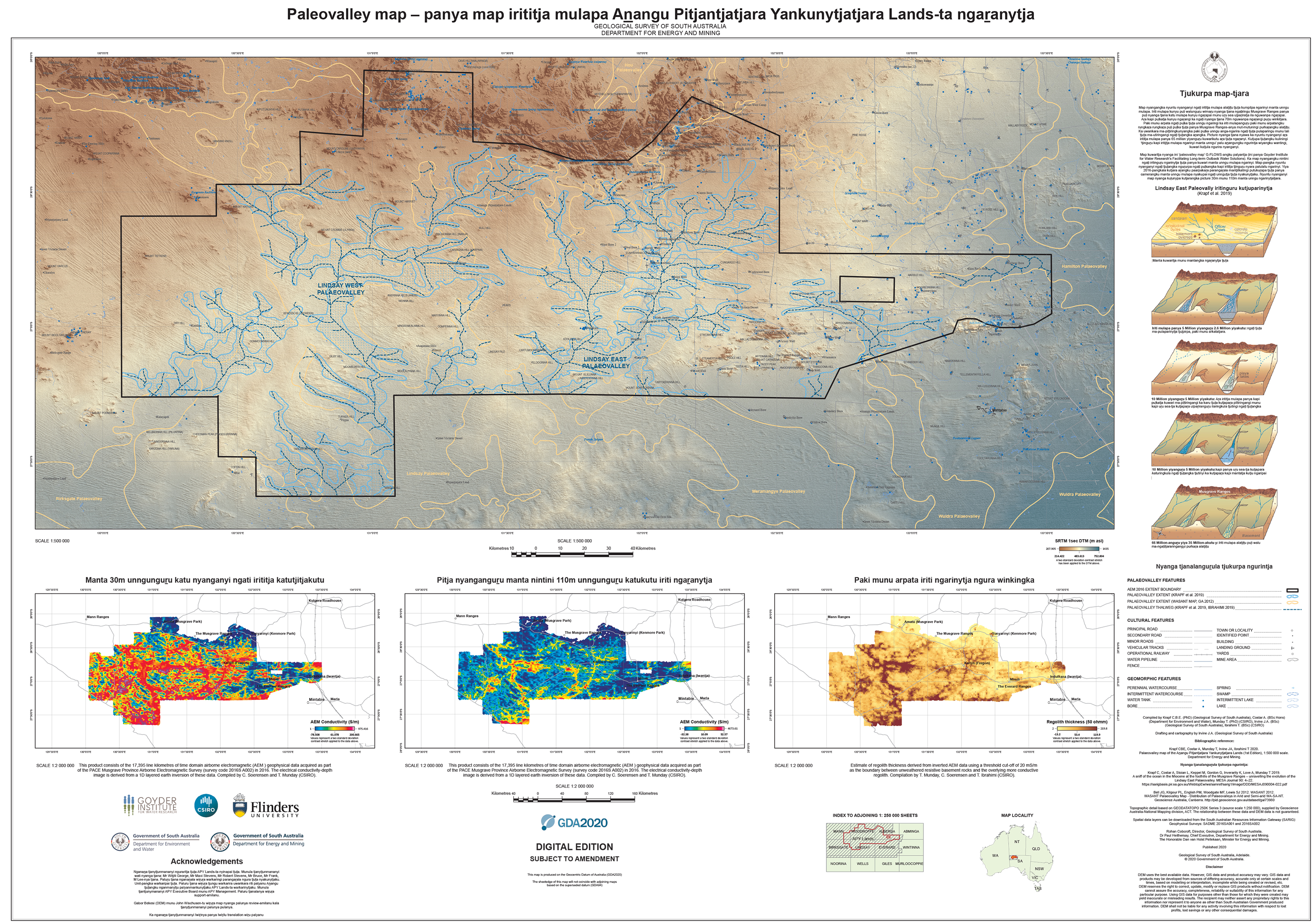 “The Department for Energy and Mining (DEM) [of South Australia] is proud to publish a geological map in an Aboriginal language for the first time.

The recently released palaeovalley map of the Anangu Pitjantjatjara Yankunytjatjara (APY) Lands, South Australia, has been translated into Pitjantjatjara by the Iwiri Aboriginal Corporation. This broadscale map serves as a guide for more detailed future hydrogeological investigation to unlock additional groundwater resources.”

“The translated map aligns with DEM’s commitment to ensure Aboriginal people can participate fully in the energy and mining sectors, and to support their communities’ aspirations for a positive future.”

For technical details of the original project that shows how SkyTEM and other AEM integrated into the overall groundwater development plan for the region, please read the following articles:

Giant airborne SkyTEM electromagnetic survey to fly over Great Southern in the south west of Western Australia. The survey is one of a series in a statewide program being conducted by the Geological Survey of WA and Geoscience Australia.

SkyTEM continues to deliver new technological advancements to the airborne EM industry with a combination of superior survey economics and exceptional exploration capabilities. The systems are designed to minimize costs and maximize results and will assist water agencies, geotechnical engineers and mineral exploration companies face and solve 21st century challenges.

The new systems are specifically designed to:

SkyTEM – Your partner in airborne geophysics. 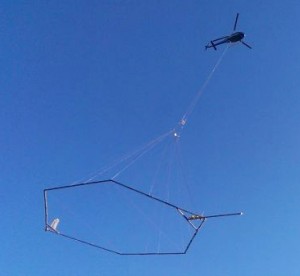 SkyTEM304 data has been successfully used to optimise the drilling programme over a water well-field in the Lower Gascoyne River in Western Australia for the Department of Agriculture and Food WA (DAFWA).

SkyTEM Australia is conducting the first-ever three-dimensional groundwater survey of the Katfish Reach section of the floodplain and part of the Gurra Gurra Lakes complex.

Data from the airborne geophysical survey will shape future management of the floodplain to restore flora and fauna including native river red gums.

The Government of Western Australia – Department of Water has commissioned SkyTEM Australia to conduct an airborne electromagnetic survey over the Murchison and Greenough River catchment basins as part of a Royalties for Regions funded regional water provision and management initiative.

The survey forms part of a four-year project to map groundwater resources and assess aquifer sustainability. The purpose is to assess the quantity, quality, availability and recharge of the groundwater resources in a key region which has a great demand for large supplies of low salinity water for urban water supplies, mining and agriculture without compromising the environment.

This survey, which comprises some 15,000 line kilometres of helicopter flying and covers an area of 57,000 square kilometres, is one of the largest of its kind in WA. The survey commenced in late January and will continue for several months.

“We are very proud that SkyTEM was selected for this project”, says Steven Johnson, General Manager of SkyTEM Australia. “It substantiates that the SkyTEM technology is regarded as the premier system worldwide for airborne electromagnetic groundwater mapping. The SkyTEM308 system provides accurate and reliable high-resolution data in a quick and cost-effective way”.

SkyTEM Australia is staffed with a team of four experienced and competent professionals, formerly GroundProbe employees, who have established SkyTEM as a highly recognized helicopter-borne EM provider. The company will be run as an independent business unit led by Steven Johnson as the General Manager.

SkyTEM technology has been employed by Australian federal and state government bodies for several strategic groundwater programs and by private industry for a range of survey applications, including mineral exploration, paleochannel and salinity mapping, geological mapping, and groundwater exploration and monitoring.

“We are very excited about this new opportunity to further expand our airborne activities in Australia”, says Dr. Flemming Effersø, CEO of SkyTEM Surveys in Denmark and Chairman of SkyTEM Australia Pty Ltd. “SkyTEM technology is regarded as the best in the market and we will now have more control of the entire process from sales to project execution and data processing. We have high expectations for the continued development of our geophysical survey business in Australia for mineral exploration, groundwater mapping and more.”

SkyTEM is a time-domain airborne geophysical system capable of delivering accurate high-resolution maps of subtle variations in geology from the very near surface to depths of hundreds of meters. The SkyTEM method is employed globally for mineral exploration and groundwater studies as well as for a variety of environmental, geotechnical and engineering studies.